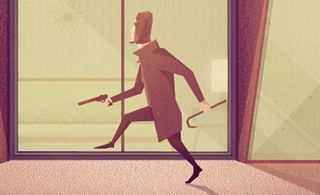 Humor writing by exaggeration is a common writing technique in humor storytelling. Like when sharing about a funny incident you observed during the day with your friends or family.

And as you tell the story, you exaggerate in a few places, because, well, it’s more entertaining. And everyone laughs as expected.

So you tell it again to another group and it’s even funnier than before.

Because you increased the drama and embellished it more than the first time. Add some here, take away a little there. Or perhaps insert your own, humorous, color commentary. In essence…you exaggerate the truth.

Humor writing by exaggeration is based on a simple premise. Take the truth and stretch it. The humor comes from how creatively, and how much you’re able to stretch without going too far.

So here are three ways to use exaggeration in your pursuit of humor writing.

There are two parts to a one liner exaggeration joke. The set-up and punch line.

The one liner, exaggeration joke was a regular part of the comedy routine used by former Tonight Show host, Johnny Carson. In fact, he often used the audience to set-up the joke during his monologue.

Johnny: I visited a small town the other day.

Audience: How small was it?

Johnny: It was so small…

…you had to make a reservation to use the parking meter

…during snowstorms, salt was spread using a salad shooter

…the municipal water system’s pump was supplied by Water Pik

The set-up line leads you toward a general assumption and the punch line surprises you with a twist you didn’t expect. One that exaggerates the truth to a level of absurdity.

Humorous, anecdotal stories—like the ones you tell about your day—are more than just a joke consisting of set-up and delivery. They’re universal in nature because they represent an average, everyday life. Funny stories that could happen to any of us.

Often it’s truth with an emotional aspect to it. Like an embarrassment, unpleasant experience or pain that everyone relates to in some fashion.

Like your last visit to the dentist who had an unhappy childhood and now takes sadistic delight in tooth extraction.

They pursed my lips till they resembled the stem-end of a tomato, and I had to take my sustenance through a quill for twenty-four hours. They sharpened my teeth till I could have shaved with them, and gave them a wire edge that I was afraid would stay, but a citizen said, “no, it will come off when the enamel does” –which was comforting at any rate.

When writing short, humorous skits, there’s not much time for character development. So I create exaggerated characters by using common stereotypes.

The vain, female Diva, the dumb jock, the shifty guy lurking in the shadows, the nerdy geek and the miserly accountant.

Stereotypes make funny characters because your audience already knows something of the character’s motivation and reasons behind what they say and do.

The female Diva is not just vain. She’s so vain that whenever she sees her reflection, she pauses to appreciate it. The dumb jock is so clueless he doesn’t realize the football helmet he misplaced is on his head. And the nerdy geek is so socially awkward he talks to computers like they’re people.

People laugh at them because these exaggerated, stereotypes don’t represent anyone in real life.  Even though everyone can probably think of someone that’s a close resemblance.

So when you need to add humor to your writing, start with exaggeration. You’re probably already better at it than you think.