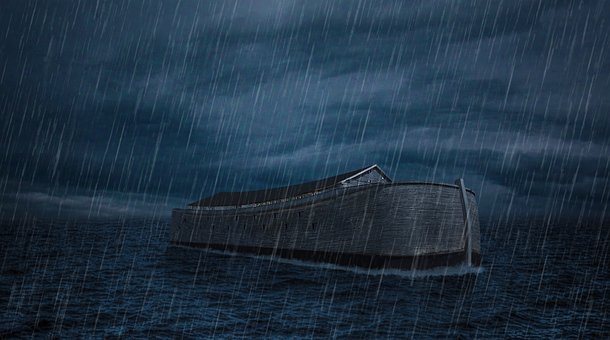 FOUR LESSONS FROM THE BIBLICAL STORY OF NOAH’S ARK

The Biblical story of Noah’s Ark in Genesis is more than a children’s Bible lesson.

It’s also mentioned in eight other books of the Bible, which includes Jesus describing it as a real event.

Here are four lessons the story of Noah’s Ark has for all of us.

It’s affirmed throughout the Bible. God is love.

But if you stop there…focus only on God’s love…the story of Noah’s Ark is puzzling. Because the next obvious question is…

Since God grants us free will, we get to make our own decisions. And bad decisions lead to bad behavior. Even to a level of evil. Scripture calls this sin and says we’re all perpetrators at some level.

God lets us carry on with sinful behavior for a season—which we’re in right now—but not forever.

Because God is holy and just, He eventually deals with sin and judges with perfect fairness. But because of His love, He wants to spare us. Therefore He…

Noah’s ark was God’s provisional flood escape plan. While building it, Noah warned everyone about the coming disaster so they had the same opportunity for escape. But they refused to listen and respond.

And Jesus Christ represents God’s eternal provision today—for those who listen and respond.

THE BIBLICAL STORY OF NOAH’S ARK PUSHES AGAINST SOCIAL CONVENTIONS

God tells Noah to build an ark and provides instructions.

And Noah builds it all the while proclaiming the coming flood. The first religious nutcase! Especially considering the word “flood” wasn’t even in the ancient parchment dictionary.

You can imagine the laughter. The ridicule. The late night monologue jokes.

Had it been today, Noah wouldn’t make it past the city building permit.

And thousands of years later, Jesus did likewise. Hanging out with social outcasts and infuriating the religious elite by healing people on the Sabbath. Not breaking the command itself, but the extra rules the religious leaders unfairly piled on top of it.

The point is, when you strive to honor God and pursue a relationship with Jesus Christ, you’ll stand out in the crowd. Push against the culture. And the drivers of the popular culture may snub you in return. Ridicule you. Maybe worse.

And rather than assuring complete protection, Jesus simply says to deny yourself and follow him. No wonder the number of Jesus followers keeps dwindling.

Did God really have to make Noah take all the animals with him? What about herding them up the side of a mountain and stopping the water below them rather than cover the entire earth?

Then Noah could build a much smaller boat. One just big enough for his family, pack a little food and call it a two-week vacation cruise.

Instead God tells Noah to build a massive ark that takes 120 years to complete. Then he’s cramped up with a load of smelly animals he has to care for and surrounded by water for a year…without a hot shower.

Who says God doesn’t have a sense of humor?

The point being, God gives Noah a job so big he has to rely on God to accomplish it.

Because had Noah succeeded on his own he would have taken the credit for it. The same is true for us. God gives us arks to complete that require His help so we give Him the appropriate recognition and glory.

God could have delivered the ark to Noah assembled and ready to go. But He didn’t. Or make it more bite size, more manageable for Noah to accomplish. Not that either.

In fact, God didn’t need Noah at all. He could have created someone new and improved with the snap of His fingers.

What Noah DID provide was faithfulness in pursuing a life God approved of and in following God’s command.

And it teaches us something else about God.

Not only does God love and provide for us, He invites us into His work. We don’t have to. We’re not doing Him a favor by participating. But when we do, we’re the ones that are blessed. Go figure, right?

You see faith is never merely passive belief. As James says, it’s lived out through our actions.

So what’s your ark? What massive spiritual assignment is God handing you? Think it’s too big for God and you to complete? Or is perhaps, your faithfulness to and view of God too small?