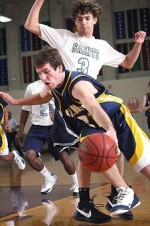 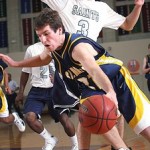 Sports often lure people away from church. But a church intramural sports league can grow your men’s ministry.

And when used strategically, a church intramural sports league can also be an effective tool for church outreach. Here’s how.

According to the statistics, a typical church congregation is 61% female and 39% male. And that’s just attendance. Talk about actual participation in church life and the ratio shoots up to 70% – 80% female.

For the most part, men sit on the religious sideline. First by choosing not to attend church and then when they do, it’s worship attendance only.

When I took on leadership of the men’s ministry at my church, this staggering mismatch in gender involvement was like facing a climb up Mount Everest.

Well, men are not naturally relational like women. Women enjoy drinking coffee together and talking about their family. Men don’t.

But men are mission oriented and will aspire to a cause.

And that’s what a church intramural sports league gives them. An objective. A mission.

For the most part, men prefer action. They’re warriors. A church intramural sports league gives them an opportunity to compete…to win. And winning is an achievement that men value.

And as they compete as a team…as they strive to win, they also build comradery with teammates.

Although men don’t relate like women, they do relate. They bond together as they pursue a mutual goal. And that goal can be turned into a spiritual purpose. A shared brotherhood.

An intramural sports league presents another distinct advantage. The league is built completely within the church. Guys playing against other guys from the same church.

Sure. It’s still competitive. Everyone plays to win. And sometimes, tempers flare a little. But it exists within a greater community that is part of a greater purpose.

And when the game is over, it encourages guys to part as brothers.

Team coaches play a key role in a church intramural sports league. Their leadership exerts influence on men to take the next step. It is a critical component in the engagement process.

For this reason, I’m careful about the men I recruit as coaches. They must set the team agenda and lead by example. Because they are the bridge that leads from the court to the church service.

When team unity is formed through a church intramural sports league and coaches exert influence, it helps move men together into spiritual activities. Perhaps, not all at once.

But one step of faith at a time.